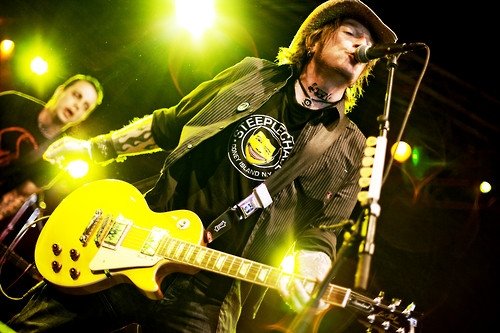 Prolific songwriter, troche guitarist, Wildheart and all-round gung ho good guy spearheading direct-to-fan movements and one of those artist who actually connects on every level

And in the beginning there were The Wildhearts, anarchic and hard to define, some said Metallica meets The Beatles. The first charge (90-97) brought classic albums ‘Earth Vs The Wildhearts’, ‘PHUQ’ and the ahead-of-its-time racket of ‘Endless Nameless’.

Reforming 2001 and touring worldwide with The Darkness, follow-up albums ‘The Wildhearts Must Be Destroyed’, ‘The Wildhearts’ and ‘Chutzpah! Were released.

And along the way, our hero has contributed to so much else, including writing for Jason and the Scorchers, writing and touring with Michael Monroe, three solo albums and the glam rock spectacle of Silver Ginger 5 with Conny Bloom.

Legend in the house. It’s going to sell out, don’t miss out!